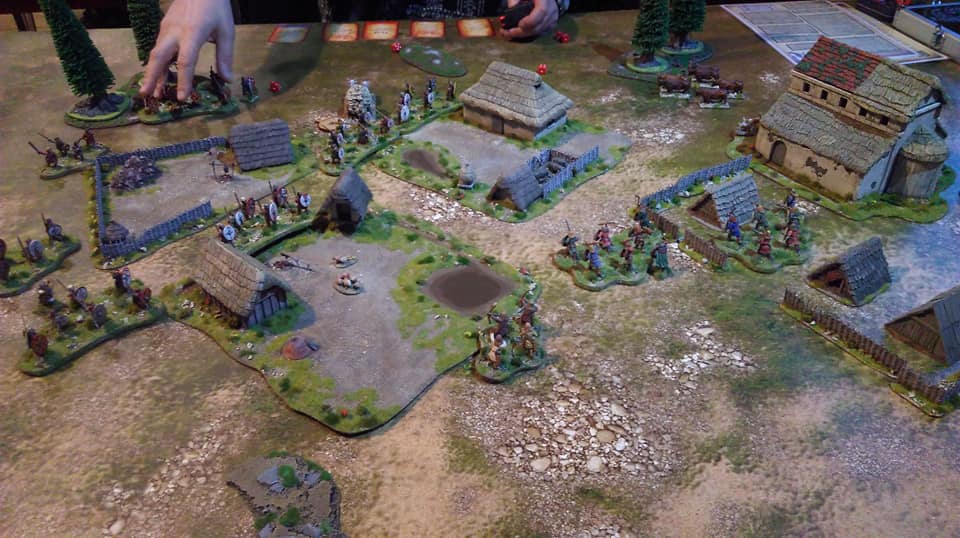 So I was playing Cruel Seas last night against Keith. He and I were playing a night attack scenario I as the Brits had to hunt his larger ships and he had to protect them. This leaves a few problems as If I get my torpedoes off my ships become almost expendable. The German ships having the extra firepower leaves me with the get close and risk destruction or stand off and risk missing conundrum Kieth won the game too many of my torpedoes ran under the targets ( I was robbed) but it was a very close run thing only 12 pts of hull on the surviving flak ship.

Next to us Nathan and Mike were playing Dux Britanniarum which is a dark age skirmish much like SAGA (but better – yes you can disagree). With one side trying to steal the others cattle a fun looking game with much of the action taking place in the fight in the village and around the cattle pen.

Elsewhere there were several games of warmachine being played which are extremely intense as the players are always practicing for the next competition finely honing there skills and lists each game played over control points and objective markers.

The other games included 40k and it’s control points a game of SAGA and even a DBA game I think.

So every game bar one had objectives other than just wipe out the other team. Some of the games have a more story driven objective system than others.

So rarely now do we see the last man standing my army your army x number of points each type games and I think we are the better for it.